Do you have problems with KTM or Husqvarna bar mounts twisting? Here's the fix!


Look familiar to you? Sometimes all it takes is a minor crash or tip-over to bend the stock bar mounts.
(image courtesy of Motocross Action Magazine)

It's well documented. KTM and Husqvarna have had a major issue with their bar mount designs since 2016. Even a simple tip over can result in permanently twisted bars. Many aftermarket options have since been developed, but many fall short. Here we discuss why, and how to fix the problem. *Update 6/2/2020: We've revised this blog post to reflect our new, Gen2 bar mounts. This blog post is primarily about KTM/Husqvarna, but applies to most all rubber mounted clamps as well.

Ever since rubber mounted bars were introduced, people have had problems with twisted bars after a crash. When things twist, it's because the bars actually slip in the clamps during a crash. Since the bars are rubber mounted, the rubber cones allow movement (as they should) and the whole assembly twists through the bolted interface. The bolts are still tight, though, so the assembly stays in its twisted state. Typically the "fix" is to loosen everything up, bang things around some, then re-torque.

But with the 2016+ KTM and Husqvarna bikes, this fix doesn't always work. So why is that? Well with other bikes and previous rubber mount designs, the bars simply slipped in their clamps. The same thing happens in the 2016 KTM and Husqvarna mounts, but the bottom bar mount was a solid single-piece design. And it actually bends; there is no loosening and re-torquing to fix it as the part had failed structurally. KTM quickly realized the problem, and from 2017 onward, bikes they have used a solid top mount. While better, this did not fix the issue and the solid top mount bent just like the solid lower mount did.

So what's the fix? Well, that's where the aftermarket comes in. But before we jump into that, let's look at the various options for bar mounts. There are three different ideas: individual mounts (right and left side bar mounts are independent of one another just like the original rubber mounts from long ago), a solid lower mount (like the 2016 KTM design), or a solid upper mount (like the 2017+ KTM design):

The individual mounts act just like the original rubber mounts. They will twist in a tip over or minor crash as rubber mounts typically do. This is caused by the bars actually slipping in the clamps. The bike will be rideable and typically everything can be straightened out by loosening things up and re-torquing. In a huge crash, you might end up snapping the bolts or bending the main studs through the top triple clamp, but in a huge crash you're not likely to ride the rest of the day/race anyway.

A well designed solid lower mount won't twist in a tip over or minor crash at all, but can bend in a big crash. So obviously an advantage over the individual mounts as it's always straight unless you have a big get-off, and in that case you're probably done riding anyway.

The solid upper mount lies somewhere in the middle of the two. For a tip-over, it likely won't twist as it helps to stiffen up the whole assembly. But for a minor or medium crash it probably will twist, possibly permanently twisting if it bends. And for a major crash, it's the same story as the above two options.

Another point to keep in mind: a solid lower mount makes installation a breeze. Separate lowers, regardless of solid top mount or not, are a pain to align to one another and straight when installing the bars. A solid lower mount is always aligned.

OK, so we just recommended a solid lower mount as the best solution. But the 2016 KTM mount was a solid lower mount stock, and that was a total failure! Well that's true. But the reason it was a failure is that the design was so weak that it easily bent. The solution is a much stronger solid lower mount. Here's a finite element analysis stress plot of the stock 2016 mount vs. one of the original Luxon mount designs. See the difference? The Luxon mount is nearly 7x stronger than the KTM version.

We've actually reduced the strength of our mount since the analysis shown here. Why? Because in a big crash something has to give. And bar mounts are inexpensive to replace relative to triple clamps, fork tubes, and frames. Some handlebars, like the ProTaper EVO, are a good compromise between stiffness and strength. They'll give out before other expensive parts in a big crash. Other bars are so strong that they won't give out in a big crash, forcing something else to break. Our goal is to make bar mounts that don't fail in small to medium crashes, but do fail in a huge crash saving far more expensive parts from failure. And what if you do manage to bend our mounts? We have a crash replacement program to help you out with a new set!

Here's a finite element stress comparison of our new Gen2 bar mounts to stock 2017+ mounts in a crash. As you can see, our mounts are dramatically stronger; 300% stronger, actually. And we've done it all with less than a 6% weight increase! This is a result of our optimization software at work (read more about that here).

Weird, you're on our web page and our product happens to be the solution, right? Well, yes of course! There are many aftermarket mounts to choose from that will solve the bar twisting problems, we just feel that our solution is the most elegant. Some other available options include:

Pretty much any good engineer knows that with bolted joints, the threads should not span the joint, particularly if the loading is in shear. That's a lot of engineering speak, but basically when a bolt goes through a joint where two parts meet, it should be across the unthreaded portion. 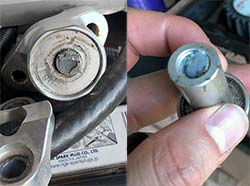 This has two benefits:

1) The bolted joint is much stronger as the bolt has a bigger cross section in the area of the joint and there are no stress risers from threads.

2) The two parts of the joint are better located assuming it's a high quality bolt and tolerances are tightly held.

All Luxon bar clamps uses tightly toleranced custom grade-5 titanium bolts for this application that provide both of those benefits. The stock KTM/Husky bar mounts do not, and we have seen bolts snap off right at this point.

Engineering design is a compromise - strong, lightweight, inexpensive; pick two. It's impossible to accomplish all three, but we feel that we're close. A bar mount strong enough, yet lightweight, and offered for a reasonable price. Our KTM/Husky mounts are tough enough to hold up to most crashes, only 19 grams heavier than stock mounts, won't break the bank, and look pretty cool doing it! Grade 5 titanium bolts are standard, and they include rubber cones and mounting posts.

Check out our bar mounts here. We also offer an off-road version if that's more your style.

{"commentics_url":"\/\/www.luxonmx.com\/commentics\/","page_id":2,"enabled_country":false,"country_id":0,"enabled_state":false,"state_id":0,"enabled_upload":false,"maximum_upload_amount":3,"maximum_upload_size":5,"maximum_upload_total":5,"captcha":false,"captcha_url":"https:\/\/luxonmx.com\/commentics\/frontend\/index.php?route=main\/form\/captcha&page_id=2","cmtx_wait_for_comment":"cmtx_wait_for_comment","lang_error_file_num":"A maximum of %d files are allowed to be uploaded","lang_error_file_size":"Please upload files no bigger than %.1f MB in size","lang_error_file_total":"The total size of all files must be less than %.1f MB","lang_error_file_type":"Only image file types are allowed to be uploaded","lang_text_loading":"Loading ..","lang_placeholder_country":"Country","lang_placeholder_state":"State","lang_text_country_first":"Please select a country first","lang_button_submit":"Add Comment","lang_button_preview":"Preview","lang_button_remove":"Remove","lang_button_processing":"Please Wait.."}

On the fence between your clamps and ride , both seem like great products but what makes your set up stand out , I'm a vet rider and what a better feel in my hands

I assume you mean triple clamps (not bar mounts)? If so, there are a lot of differences between our clamps and Ride's. Ours are lighter with more flex longitudinally for comfort, but stiffer torsionally for steering precision. You'll get an overall better feel with more responsive steering while having more comfort. We also include a full set of titanium bolts and a steering stem nut (they include none of that). Feel free to email or call to discuss!

Yamaha, Kawi, and eventually Honda are in the works, but we don't yet have an ETA on those. Subscribe to the email list for updates!

Do you have them in the pipeline for yamahas