Fork tube flex, what's it all about?

There's been a lot of talk about fork flex this year, particularly with Chad Reed reportedly running WP-KYB hybrid forks in a few Supercross races. Chad was supposedly running KYB lowers in WP uppers (with KYB internals) for “better flex characteristics”. I was curious what differences there might be in the stiffness of the fork lowers, so I set up some analysis runs to find out.

Goals of the Analysis

My analysis set out to compare the stiffness difference of two identical fork setups, but with differing lower tubes – WP and KYB. The end goal being to evaluate whether or not the KYB tubes have “better flex characteristics” than the WP lower tubes.

Here’s an image of both lower tubes that were evaluated, lined up as they were compared. The KYB is offset at the lug area 3mm from the WP to allow the same amount of lug insertion in both tubes. The necked down portion the WP tube is certainly longer than the KYB, however it's important to note that the majority of flex does not happen at that point. It seems that this is primarily done for weight reduction. The WP tube is just a touch thicker than the KYB, which largely determines the overall stiffness. Also, the upper bushing on the WP is slightly higher than the KYB, so it does a little better job of reacting the bending moment.

For the analysis, I set up 26 different FEA models. All models include a WP upper fork tube, held in place with representative triple clamps, and a lower tube which is able to slide within the upper on bushings. Thirteen models used a KYB lower tube and 13 models used a WP lower tube, all at varying insertion depths - one model per data point on the plot (in the next section). With these models, we can see how much flex each fork setup has and make a comparison.

Both fork setups are subjected to identical side loading in a quasi-static, implicit, non-linear geometric model, with non-linear sliding contact at the bushings. The resulting displacement is used to calculate compliance (flex) and reaction pressures at the bushings are probed to evaluate differences in possible binding. A key advantage to this analysis is that it removes all variables aside from the stiffness of the tubes themselves. No other variables are introduced such as bushing slop, coatings, physical loading errors, etc.

The model takes into account the bending (compliance) of the inner tube, outer tube, bushing, and to a lesser extent the triple clamps. It takes into account the non-linearity of the problem with regards to large displacements as well as non-linear contact between the bushings and inner tubes. No model is 100% perfect, but this model is absolutely good enough to see trends and report accurate values for the stiffness difference between the two tubes as well as the reaction loads at the bushings.

The contact condition does not create an infinitely rigid area at the tubes, it is still allowed to distort in response to the applied loading. Here is a plot of the contact gap opening at the lower bushing. As expected, there is a gap on the top of the bushing and the contact is closed on the bottom (the direction of the applied load). 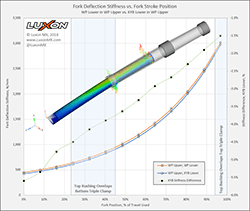 The deflection of each fork setup is plotted here at different stoke levels. The takeaway point is that you get 1.5-5.5% more flex with the KYB tubes (depending on stroke position). This for one particular load, but I also ran a sensitivity analysis to examine the response to other load levels and the system response is nearly linear with respect to load. So KYB tubes being 5% less stiff at 4000 N of load will also be 5% less stiff at 1000 N, or 100 N, or whatever load you wish within reason.

So, what does all this mean? Flex, or in engineering terms compliance, is just the inverse of stiffness. And it's highly misunderstood within the motocross industry. Is the 3.5% increase in flex an advantage? Probably not… Just look at all of the factory KTM and Husky guys going the opposite direction running 52mm forks on the same chassis.

Flex is important, but it's not as simple as more flex = better. Flex seems to be the hot topic in the last few years and I have yet to see someone explain it correctly or how it makes things better or worse! There's plenty of talk about "improved flex characteristics" and similar. But that's a completely meaningless statement. What is meant by "improved flex characteristics"? More flex? Less flex? Flex in what direction(s)? Flex under what load conditions? Until all of those questions are answered, saying something has improved flex is of zero meaning. 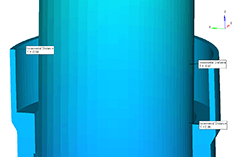 From a fork lower tube standpoint, the flex direction that is affected by changing from WP to KYB (or vice versa) is in bending; vertical compliance difference is insignificant. And the bending stiffness of the fork tubes comes into play with lateral (side to side), longitudinal (front to back), and torsional (steering) forces. All of which will have an effect on suspension performance to my earlier point (negative effect for more flex).

So of the three loading directions mentioned above, longitudinal is arguably the most important as there are a lot of off-(fork)axis loads in that direction. There is no suspension action in that direction, so the flex is acting as the suspension (as an un-damped spring). The same can be said for lateral loads, but those are of a much lower magnitude. Torsional flex is rather different as it is entirely reacted by the rider (at the grips). And torsional is directly related to the amount of lateral and longitudinal flex, which are both directly related to bending stiffness.

Or in other words, by changing the lower fork tube flex, you're changing the response to lateral, longitudinal, AND torsional loading. Is that what you really want? What is the goal of changing the flex? Do you want more or less flex? And most importantly, is there another component you can change that only affects one of the loading directions and still achieves your goal (this is the right move, in my opinion)?

Chad was reportedly running KYB tubes, but are they the same KYB tubes as what I tested with my analysis? I’m not certain. There are various KYB tubes out there, and the top guys probably have access to some thicker tubes or tubes with different profiles. I’m not even certain he was running KYB tubes at all, that’s just what was reported; and you can’t tell just by looking at them externally. It’s also curious that he ran regular hard-chrome coated tubes and not DLC coated tubes that the KYB guys obviously have access too. So who really knows other than his suspension guys? It doesn’t much matter for all of us, though, and this analysis is good for comparing tubes that we can actually go out and get. After all this, though, I’d recommend sticking with WP tubes. A touch stiffer than the KYB and with less bushing loads, they should be a little plusher feeling due to the better suspension action with less binding.

Hard chrome is porous and more lubricious which might make it a good choice for slider tubes.

I would be curious a fork friction test, effects to bushing length and material being used, along with a fork oil friction test..

Really appreciate the info you just give away guys. It is really hard to find any write-up addresing matters refered to suspension, and yet it is one of the most interesting aspects of motocross bikes.