Split triple clamps... Are they better?


Split triple clamps have a clamping area that's been cut through the middle, effectively separating the clamping surface into two distinct regions.

Split clamps are a relatively new trend in triple clamp design. Xtrig was one of the first to commercialize the split clamp design back in 2015, and in the last few years more companies have followed suit. There are at least six companies with split clamps available as of now, and more are certain to follow.

But now to the real question: They sure look nice, but do split clamps really offer an advantage otherwise? No one has provided many details aside from the classic "they improve flex characteristics" or similar marketing fluff. BTW, I hate that phrase! It offers absolutely zero information about if or why they're better. There's another blog post in the works that I'll be posting soon about "flex" to help clear all that up. Anyways, back to the split clamps. The short answer is, yes, they're better. But why? I'll dive into the details, the pros, and the cons to a split clamp design in the sections below.

Have you ever seen a rider flat land a jump or some similar hard hit, in slow motion or as a still image? You may be surprised at how much the forks flex! And they're actually always flexing, it's not just from very hard hits, they flex all the time at various levels. The key point here in regards to the split clamps isn't that the forks flex, it's how and where they flex. The fork assembly is free to bend without support (aside from the structural properties of the fork itself) from the axle all the way up to the triple clamps. But the triple clamps are relatively stiff, and they are what mates the forks to the rest of the chassis. So, the relatively smooth bending of the forks turns into a kink at the bottom triple clamp. 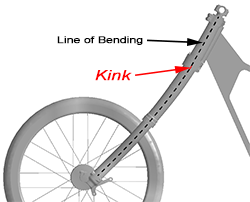 You can see this kink exaggerated in the photo here. As the forks compress, the bushings that the inner fork tube slides on will pass through this kinked spot, which causes some binding of the suspension, and a harsh feeling for the rider. Anything that can be done to minimize the kink in the forks will allow for smoother suspension action and a plusher ride. And that's what split clamps do. The separate clamping areas are able to flex independently of one another and smooth out the kink. The kink is still there, there's nothing that can eliminate it in a traditional suspension fork design, but it's slightly reduced by using split clamps.

We can show the details of the kink with some finite element analysis. Here's an FEA result representing a hard landing that's causing the forks to bend. We can look at how the fork tube kinks with both our Gen1 (solid/traditional) triple clamps shown on the bottom of the image and our Gen2 (split) triple clamps shown on the top. These happen to be KTM/Husky clamps, but all fitments will be similar. We can plot the fork tube deflection vs. distance along the fork tube to see how the tube kinks (more specifically, we're looking at deflection of the inner diameter of the fork tube). The traditional style clamps are shown with a solid red line and the split clamps are shown with a solid blue line on the graph. But from this plot, it's not so obvious what's going on. To more easily see what's happening, we can take the derivative of these curves and see the slope of the fork tube bending along its length (see calculus is useful!). The slope of the fork tube is shown by the dotted lines. Ideally, we'd have a constant slope that doesn't fluctuate much as that represents a kink in the tube that binds up the suspension. You can see the slope of the split clamps is a little smoother (dotted blue line), especially right where the triple clamp starts to clamp on to the fork tube.

So how much of a difference does this make in reality? Well, it's not a night and day difference by any means, but it is noticeable on the track. Clearly a traditional clamp isn't terrible as we've all been using them for a long time, and many championships are won with them. But any small improvement is a step forward towards a more comfortable and faster ride. One important thing to note here is that the split clamp only helps this issue with the bottom clamp. The top clamp being split doesn't help with this at all as the fork bushing never slides through the top clamp clamping area. 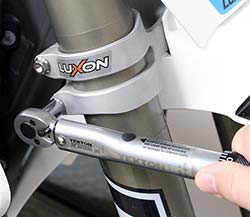 You should always use a torque wrench to tighten your triple clamp to fork tube bolts. Always! Why? For similar reasons to the above section. Too much torque will result in too much clamping load on the fork tube, which will distort it. And this distortion will cause binding as the fork bushing travels through the tube. There's good news here, though; you can avoid this distortion by using a torque wrench and tightening the bolts to the recommended torque value. That's it! It doesn't matter whether you have a split clamp or a traditional clamp, using the correct torque will keep this from happening.

That said, the split clamp makes torquing the bolts correctly very easy. With a traditional clamp, you (usually) have two bolts that tighten a single clamping surface to the fork tube. If you tighten one bolt, the other bolt relaxes a little. Tighten the other bolt back down and the first bolt relaxes. In order to achieve the correct and even torque between the two bolts, you have to tighten back and forth between both bolts, over and over until they're both correct. It's not a huge deal, but it is mildly annoying, especially after you tighten down a split clamp! The split clamp is, well, split. Each bolt tightens down a section of the clamp independent of the other section, so one bolt doesn't affect the other. You torque one bolt down, then the other bolt, and you're done. There's no back and forth to deal with. It's not a big deal, especially for the experienced mechanic, but it is nicer.

OK, if you've seen Xtrig's promotional "circularity demonstration" video, you may have some more questions about this... Give that video a watch now that you've read my paragraph above. Xtrig's point is that the clamping load of an "opposing clamp" distorts the fork tube less and allows for smoother sliding of the tube. But there are some key things they're leaving out: 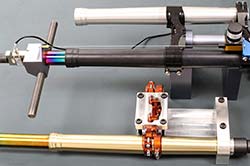 So, the video ignores some key issues. But it's a marketing video, not an engineering video, and we shouldn't read too much into it. There's nothing wrong with an "opposing clamp" system, but there's no real advantage to it either. We've done a lot of testing, and the most important points that eliminate fork tube slipping and bushing binding in the clamp area are: using the correct torque, using a high quality triple clamp that has a precisely machined bore, and making sure the clamping interface is clean and free of dirt/grease when assembling it. That's it! It doesn't matter what clamps you use so long as you hit those three points. If you're still worried about your fork tubes slipping, torque down the top triple clamp just a little more. The top clamp's torque won't cause any fork binding as the bushing doesn't slide through that area, but it will help keep things from slipping. 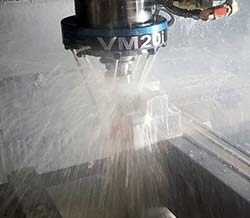 Any time a part gets more complex, the cost goes up proportionately. Split clamps are a lot more difficult to machine than standard clamps; you need specialized tooling and more complex fixturing. And the additional features add cycle time (they take longer to machine). All this results in a higher cost. So if you want split clamps, expect to pay a little more for them.

Aside from the cost issue, though, there aren't really any other disadvantages worth mentioning. If you want the latest in technology, the best ride, and a cool look, then they're the way to go!

They're Not All the Same

In this post I was specifically discussing the split clamping area, and largely ignoring the rest of the clamp design. But remember that the rest of the design is enormously important! And not all split clamps are equal... Just because there's a split doesn't mean it's just as good as another clamp with a split. Beware of companies who simply add a split to their clamps or copy other designs. We've spent 1000s of hours designing, analyzing, testing, and developing the material layout of our clamps and the split geometry. Check out our KTM Gen2 split triple clamps for some more images and information. Fitments for other brands are in the works and coming soon!

I'm currently have a deposit on a 2022 Honda CRF450WE when it's available in August(That's what I was told by the dealer) that I can't wait to have. I have been looking at mods and doing research before the bike gets here and learning what parts work and don't work. I just learned about your Gen2 triple clamps for the 21' CRF450R in the stock 22mm offset. I was looking into getting a set from Ride Engineering that has 22mm and a 23.5mm that they recommend for motocross. Your technical information had me thinking a lot and I also like the look of your clamps as well. I think it would really pop on that bike. Does it really matter what offset to get? Or should I just stick with 22mm since it's the same as stock? And if I plan on adding the steering stabilizer that Honda use to put on their bikes, do you have a mounting system for it? Thanks!

We currently only offer 22mm offset, but will have 24mm in the near future. Which one you want is up to you, really, as everyone prefers something different and will depend on where you're riding. Most people are pretty happy with the 22mm offset on the new chassis, though.

Both offsets will be compatible with the HPSD damper. As of now, we don't offer an install kit for the top portion of the damper, but we're working on a weld-on bung for that. Bolt on kits just aren't a great idea and weld on is much better. The downside is you need to have a good aluminum welder install it. Shoot us an email or call if you have more questions!

thank you very much for actually explaining these things with actual data and not marketing bs! i guess the only way to completely eliminate the pinch binding of the bushing as it passes through the clamps would be to rehone the fork tubes with the clamp torqued while honing. this is surely splitting hairs and would be a bit crazy with removing and recoating etc, but what i have seen people pay for suspension mods anything is possible !

What a great write up!

Kawi clamps are in the works! We should have them available in a couple of months.

This is all so nerdy. I really appreciate you sharing the thought process behind the development. I appreciate that you are somewhat focused in this particular field concerning the advance of Motocross technology, but as a designer, I know you have Illuminating opinions on other areas of Technology that are outside of that which Luxon presently manufacturers.

I would love to hear your thoughts on other technology Innovations, even if they are not presently in your wheelhouse.

I just want to learn more. It will never end.

Hi Don, Thanks for the comment. Check our our other company Luxon Engineering, where we do general mechanical engineering work and consulting for some more tech stuff: https://luxonengineering.com